No items to display

No items to display 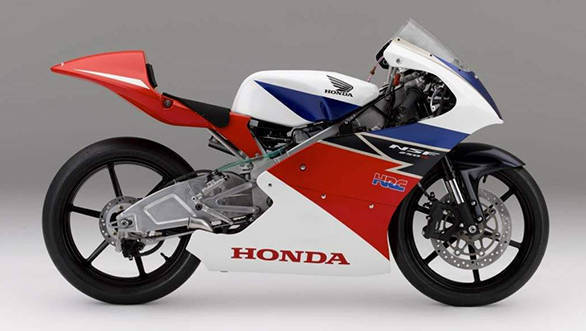 Honda Motorcycle and Scooter India has announced that it will introduce the NSF 250R Moto3-spec bike in India to promote motorsports in the country. The Honda NSF 250R Moto3 bike will make its India debut by 2019. Honda will also start an exclusive racing series on the NSF 250R from 2019.

The upcoming Honda NSF 250R racing championship will be an ideal platform for young racers in India to showcase their talent at the national level. Honda also aims to produce a world-class rider from India to compete with the best riders around the world in Grand Prix racing.

The Honda NSF 250R draws power from a 249.3cc single-cylinder engine that produces 47.6bhp and 28Nm of peak torque. It is an incredibly light motorcycle with a dry weight of just 80kg. The NSF 250R is developed by Honda Racing Corporation (HRC) to replace the two-stroke Honda RS 125R.

Honda is a global leader in motorsports with over 750 Grand Prix wins under its belt. To replicate the same success, all Honda Group of Companies including India, have formed three new teams exclusively for Asian riders in international racing championships.

The Moto3 and Moto2 are the stepping stones to MotoGP, the most premier class of circuit racing. Honda India dreams of an Indian rider representing the country in these teams.

President and CEO and HMSIL Minoru Karo said, “It is my dream to see an iconic Indian compete in Grand Prix level racing. With a clear development path and structured approach to nurture riders in place, we now want to take Indian motorsports to the next level. Honda will introduce the Moto3 machine NSF 250R as competition bike in India next year.”

Thoughts On The India Debut Of Honda NSF 250R

Honda has been an active player in the Indian motorsports scene and the company has taken a step ahead by deciding to introduce the Moto3-spec NSF 250R bike. With a world-class bike, the talented Indian riders can hone their skill and can step up their game. It will be a golden opportunity for all the budding riders in the country.